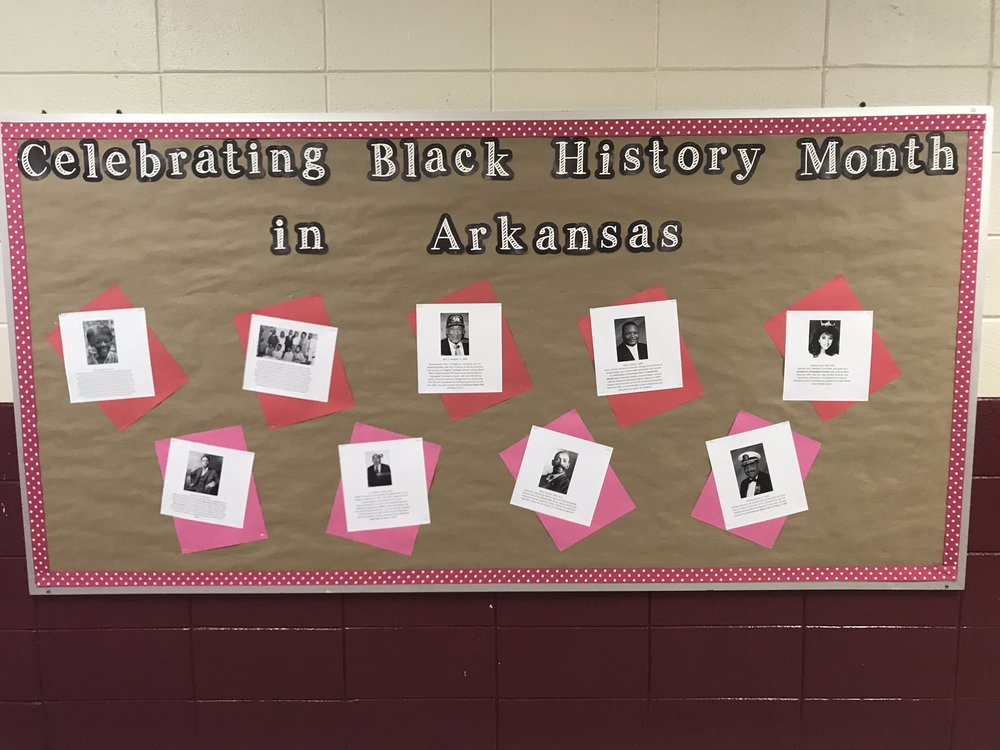 February is Black History Month, and across the district, classes are celebrating and studying African Americans through various avenues.

At Beebe Early Childhood, several classes are reading books and watching videos about famous African Americans, such as Rosa Parks, Ruby Bridges, Jackie Robinson, and Jessie Owens. After reading and watching, students discuss, illustrate, and write about what they have learned. Mrs. DeJesus' and Hall's classes are learning about famous African American inventors George Crum, Garrett Augustus Morgan, and Dr. Lewis Howard Latimer. Ms. Harvey's class will be listening to and acting out the song "What a Wonderful World" as well as reading the book based on the song by Bob Thiel and George David Weiss. And Ms. Whitaker's class will be compiling a quilt based on the book The Patchwork Path!

Beebe Middle School celebrated the start of Black History Month and World Read Aloud Day by having Mr. Reed read a book with an African American protagonist to Mrs. Kidder's class. Throughout the month, classes will complete several activities relating to African Americans, such as researching and creating a biography project over an influential African American. One important writing prompt that students will address is, "How could we eliminate racism in the world?" Some students will even create a research booklet on Martin Luther King Jr. Also, classes will read Heroes of the Revolution and Black Heroes of the American Revolution, two books that tell the story of Black American History in the American Revolution. And throughout the month during morning announcements, the quote of the day will be from a famous African American!

At Beebe Junior High and Beebe High School, students will recognize and study Black History Month in several ways. At Beebe Junior High, Mrs. Lane's and Mrs. Poertner's classes are researching and highlighting famous African Americans from Arkansas. Among the Arkansans they will be studying are Maya Angelou, Keith Jackson, the Little Rock Nine, Scott Joplin, and Bass Reeves. And Coach Tonya May's classes are studying the lives of Harriet Tubman and Frederick Douglas. At BHS, throughout the last week of February during Advisory classes, students will watch videos and participate in reading activities related to African American history. They also have a bulletin board display celebrating Black History Month!

We are proud to be able to celebrate and study the lives of so many influential African Americans throughout the month of February!